In 1997 my painting underwent a dramatic shift inspired by another immersion in the New York art world where two exhibitions had particular impact: some Monet drawings in the Degas collection at the Metropolitan Museum and a Diebenkorn retrospective at the Whitney. Taken together they renewed my interest in drawing and catalyzed a change in my work that reintroduced representational objects. While studying the strong horizontal and vertical elements of the paintings in the Diebenkorn exhibition, I suddenly understood not only Diebenkorn but also Mondrian and the power of sound structural composition.

From about 1997 to 2004, I worked on establishing structure in my paintings through the use of skeletal figurative images and 'sketchy' drawing with the brush. It seemed that in order to explore structure thoroughly I needed to rely on the solidity of figurative elements. These paintings were primarily centered on a theme I called 'proliferating signifiers of the urban matrix' and included reference to power lines, electrical transformers, satellite dishes, etc. as well as still-life objects. This more figurative body of work was critiqued by Karen Wilkin in 1998, and by Ken Carpenter in 2002 and was exhibited in Musings on the Unnatural Landscape, a solo exhibition of these abstract expressionist paintingsin Victoria in 2004. 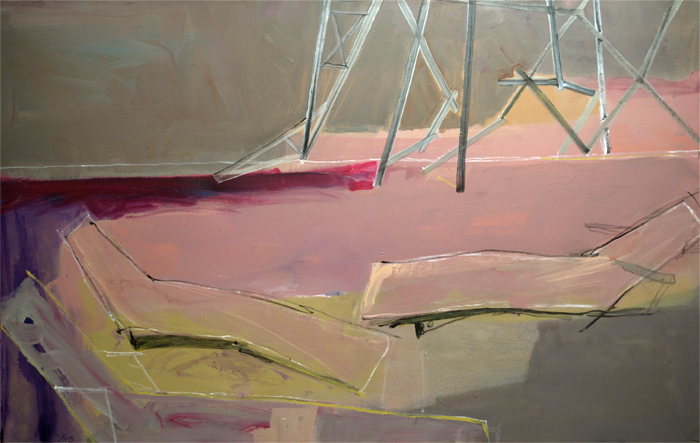