Down by the Railroad Tracks

The Devenish Building in Calgary.
Home of the Michelangelo gallery.

My show, Lyrical Abstraction opened a few weeks ago in Calgary. It was a huge production as ever a solo show can be. And such an adventure right from packing a backpack to unlocking my front door two days later. I like these whirlwind trips and this one reminded me of a weekend I spent in New York where a million things happened in a very short period of time. But that's another story.

I slept by the railroad tracks the first night in Calgary but certainly not in a ditch. This was the ninth floor of a national rail hotel. And actually I didn't sleep at all because the trains ran every half hour to forty minutes all night right below my window. I wondered about all these trains and what was in them and where they were going. Long black trains rocketing through my insomnia. What a wreck I was the next day, the day of the opening. I had a healthy dose of theobromine and five cups of coffee with breakfast which I realized also deprived me of any ability to have a nap before the opening, the pinnacle of this project. For me it would be the proof of my eidetic blessing or possible malediction. 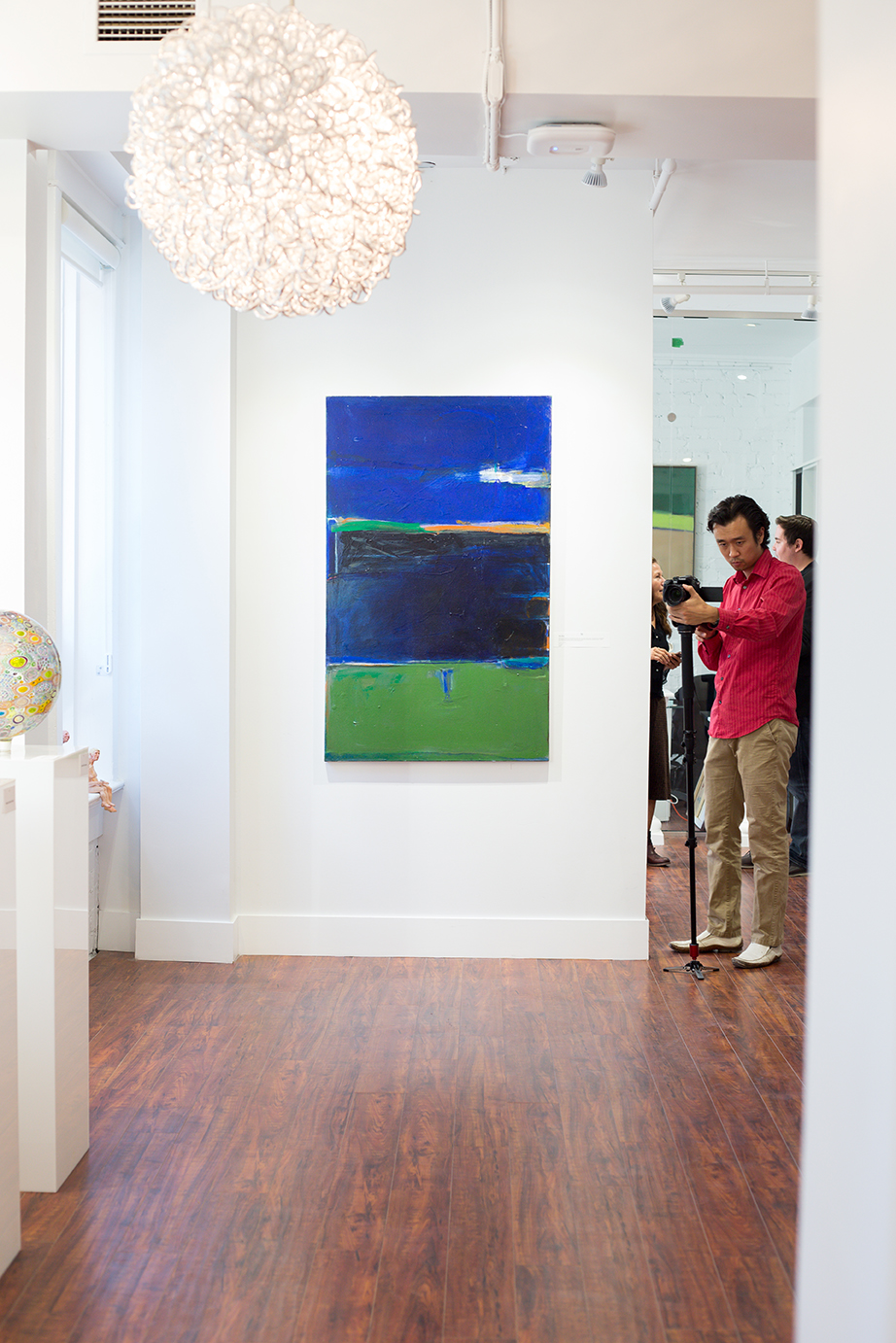 So there I was at the opening where a film crew probably expected me to be very intelligent, and free of black rings under the eyes and overall droopiness. I did my best.
Woman with Artichoke -Picasso 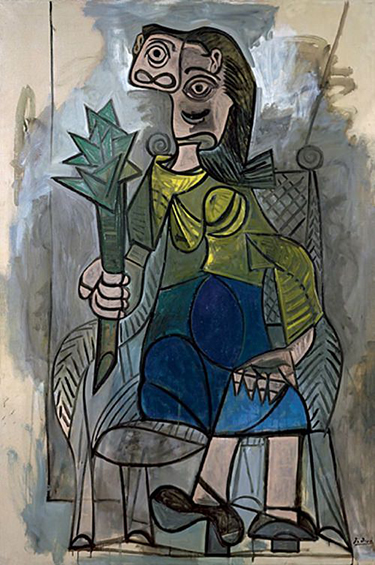 Openings are very intense and like live theater in a way although everyone usually cracks and becomes human after lengthy conversation. This is almost too much for me though because the experience happens over and over all night and you see into the debths of each other quite deeply. This is a big shift from working alone in the studio for months prior to the event. From one extreme to the other, suddenly I feel exposed and simultaneously powerless. But maybe not quite as vulnerable as I used to feel at my first few openings because now I have come to realize I have already achieved success independent of what happens in the gallery. It is simply the success of freely creating these pieces according to my authentic personal vision and approbation. 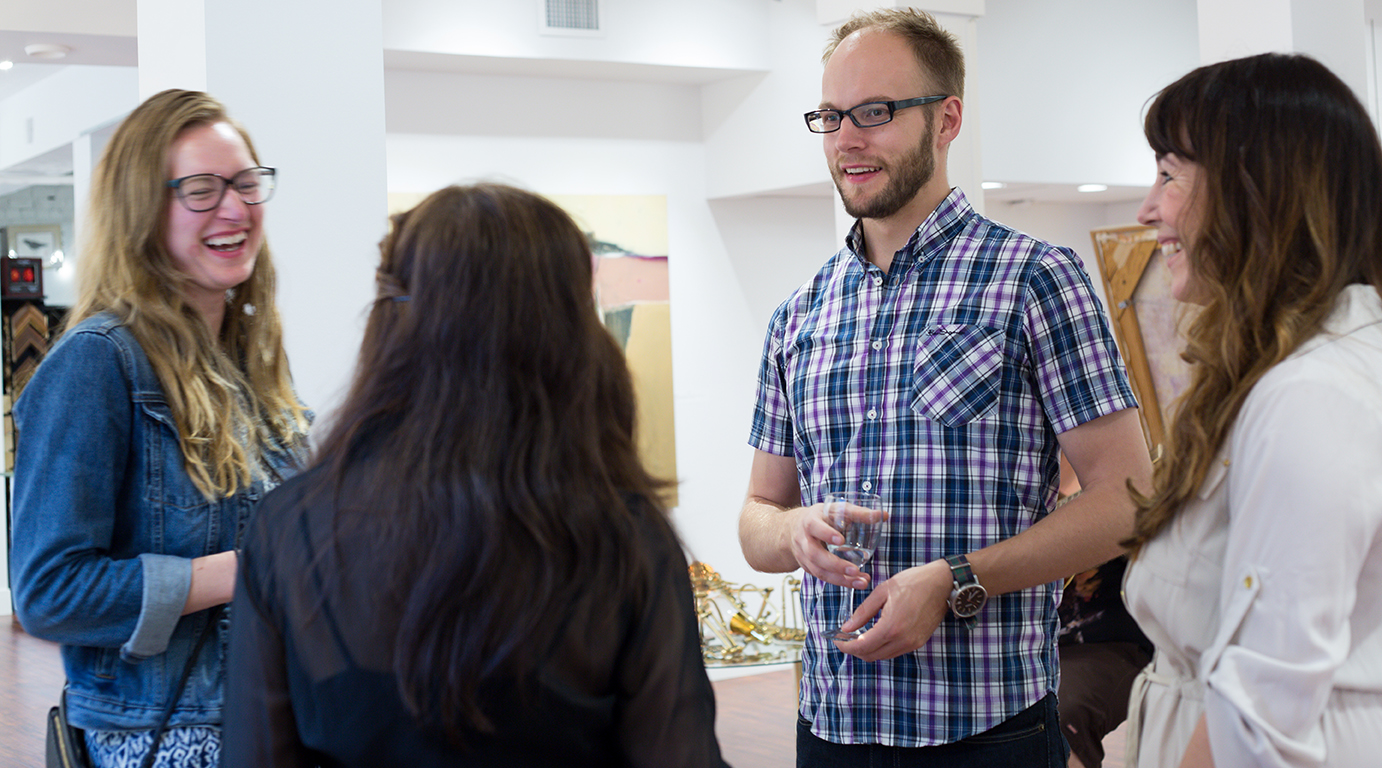 Yes that's the back of my head.

When I go to one of my openings, I have already done my job. Completed my work. Reached a point of completion with a number of paintings. The whole point of painting is to respond to an internal creative impulse because it is a life-giving energy. Through a long process in time and artistic development I come closer and closer to a pure representation in paint of what I wish to communicate in spirit. The communicating is not at all literal or even rational. Intuitively sensing a thing without the distraction of conceptual idea has a deeper base, something fundamental to the understanding of the structure of reality and experience. 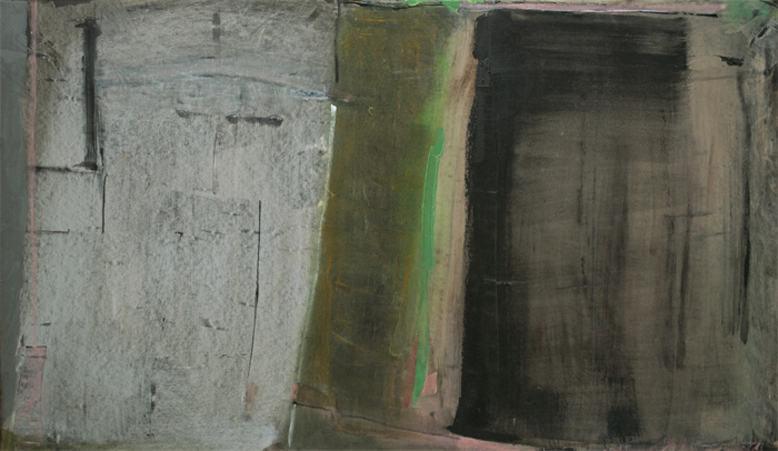 In the current show, the piece Rebirth is the one remaining painting from Emma Lake and remains as you see it now except for maybe a 5% fine-tuning. Usually when I look at an older piece from some previous decade, I see it through a lens of new artistic experience. When I see I can make slight improvements, it is affirming of progress and at the same time mentally refreshes the original visual fingerprint. Sometimes the retrospection of an early painting is like looking at yourself in a home produced movie where you appear as a guileless neophyte. And there is beauty in that.

A fellow with a round face and big smile approaches waving a credit card. He hugs me around the shoulders and says “Come with me, I want you to see what this does”, and he buys the piece Diamonds and Dust. Basically it's a white monoprint and the hardest color palette to work with. A reflection on the opposite properties of diamonds and dust, one being almost indestructible and the other a reduction of something that once was something else. “The hardness of a diamond is part of its usefulness, but its true value is in the light that shines through it.” 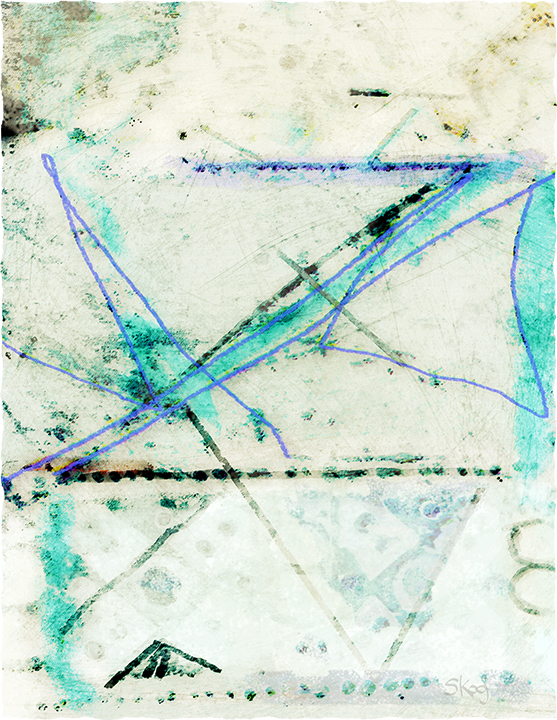 Perhaps one's life journey is one part navigation and one part complete randomness. Now comes the second half of the equation. The part where pure unanticipated unpredicted and anti-soliptic randomness begins vis a vis the artwork itself which has crossed an imaginary invisible barrier and become not something internal to me but something external and given over to the world at large. Beautiful wild horses briefly captured and escaping again into the wilds of individual freedom. I hate to see them go yet they belong to the world now, not me.